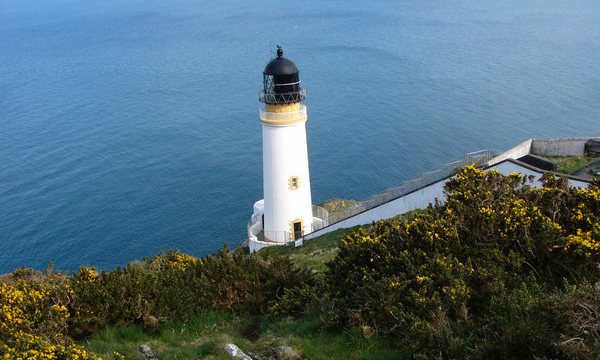 A customer of ours, Nigel lives in Maughold Lighthouse “at the end of the world” in a stunning part of our Island. In 2014 BlueWave began to provide him with our home wireless broadband – UltraBand.

Before BlueWave installed the wireless connection directly to Nigel’s lighthouse, he had very limited access to fixed telecoms infrastructure due to his remote location resulting in still receiving dial-up speeds whilst the rest of the UK sped past him with ever-increasing broadband speeds.

His previous internet supplier told him he would be unlikely to ever receive fibre in his area, predicting continuing poor speeds as well as Nigel having to commit to pay for both a landline and an internet service. Nigel remembers having to drive to the top of a nearby hill to get phone signal or head to the local library to access the internet.

In 2014, Nigel was encouraged to speak with BlueWave and see if we had a solution that might help him. We did! In order to supply Nigel with a reliable, fast wireless broadband service, we upgraded our infrastructure to accommodate his location and he now gets “a great service” with speeds which allow him to work from his Lighthouse.

With this new connection to the rest of the world, Nigel can work from home on business deals as he is now connected to clients around the world from the USA to China. Not only does this help him secure new business deals but he can also store using the cloud enabling quick sharing of resources with clients as well as a safe back-up that removes the need to save everything to hard drives.

Of course the BlueWave connection isn’t just helping Nigel work hard but it gives him plenty to do in his ‘downtime’ too including keeping in touch with friends and family easily via VoIP phone and video calling as well a scatching up with the latest programmes through online streaming platforms such as Netflix. A service Nigel never imagined he would have access to.

It turns out BlueWave can even facilitate better access to healthcare as Nigel even got his tooth inspected by his brother who is a dentist to see if he needed to book an appointment (not something you can do in the local library)!

Quite simply Nigel says; “I don’t know what I would do without it”.

At BlueWave we pride ourselves in supporting customers in imaginative ways, from providing connection to rural locations to our quick response times if there are problems with the service.